I have been reading so much lately about metal cans that I wanted to share my real life “quick dinner” experience relying on the canned food in my pantry.  This was my dilemma.  I had about four packs of ground turkey in the freezer — most likely bought when they were on sale at the ACME one week —  and I needed to figure out what to make for dinner.  I love the idea of Taco Tuesday®, and I was into it for a while, but honestly, the novelty has worn off.  How many tacos can a girl eat?  I will admit that I always have a box of taco shells in the pantry along with other canned food, but this week, I felt like something different.

In addition to Taco shells, I 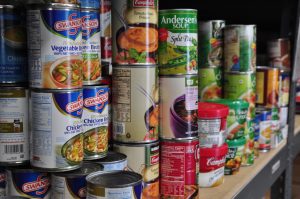 also have several cans of tomatoes and lots and lots of beans in my pantry. You will also find other canned food such as corn, canned pumpkin (I just read canned pumpkin has even more nutritional value when it is canned) pineapple, canned tuna and salmon. I am making myself out to be a vision of health, which is not entirely true. We also have chips, goldfish, granola bars and OREO cookies. However, I do care about what I eat, what I feed my family and I also love to cook good food. I just believe that certain canned foods are acceptable, and others are not. I have always used and enjoyed canned tomatoes and beans, and they are probably the top “canned food” staples in my pantry. I used to buy canned broth, as well, but I have started buying the boxes because they’re larger.

I decided to make a black bean turkey chili with the boxed, jarred and canned food in my pantry. My family loves chili and I usually make it with canned kidney beans, but only had black beans available. So, I threw the following recipe together.  Here it is:

This is my perception of canned vs. fresh vs. frozen vegetables.  I always considered fresh the best, even if it was from across the country, followed by frozen and then canned food. Boy was I wrong!  Even though I have been educated about canned food, there are still certain vegetables I would never buy in a can. Broccoli, spinach, asparagus, onions, potatoes, and carrots to name a few. For broccoli and spinach, I prefer frozen over canned. (I’m not even sure they sell broccoli in a can?).  One of the problems I have with canned food is that I am concerned with the sodium content and the added ingredients. I was just reading two posts on the Refreshingly Real Facebook page @Refreshingly Real about canned food and I realize my perception is completely wrong.

Canned vegetables are picked at the peak of ripeness and usually canned within 4 to 12 hours! The fresh vegetables are steam heated and preserved in airtight cans.  Most canned vegetables are NOT loaded with preservatives and salt and all you need to do is read the label if you are unsure.  The post I just read said that canned tomatoes contain more lycopene than fresh and canned pumpkin has more vitamin A than fresh. Interesting facts for those that are skeptical.  Cans are also lined to preserve the integrity of the can and its contents. The lining also protects the flavor of the canned food.  I once ate tuna that tasted a lot like metal but in hindsight, that could have just been the mercury in the tuna and not the metal (Ugh! Note to self – only eat tuna once a month!)

Cans have been around longer than most people think.  The history of the can began in 1795, when Napoleon offered a prize to the person who could invent a way to preserve food for his navy and army.  Read about the History of the Can here.  They are inexpensive, portable, sustainable, and recyclable.  They are even selling canned wine now because it costs 40% less than bottled wine!  Steel food cans are also 100% recycled!  Here is a link to an interesting and entertaining video about cans produced in the 1950’s.   I really find cans interesting, and the more I read about how fresh and nutritious canned foods are, the more excited I am to expand the canned food options in my pantry.  Find out more about cans on the Can Manufacturers Institute website. Miltec UV supports the can and metal decorating industries by selling equipment that instantly cures (dries) the ink on flat metal sheets which are formed into cans.